“We are here” is an artistic action by Yolanda Domínguez with the collaboration of María Gimeno that aims at giving visibility to women artists. The action took place on February 21st, at the opening of the ARCO international art fair, the most important platform for Spanish contemporary art, and where the low participation of female artists is evident year after year.

Women have not only been excluded from history on the whole but also from Art History. They very rarely appear in books or in museum collections. The Prado, the most important museum in Spain, has on display only 4 works made by women and has held just 1 solo show by a woman artist in its 200 years of existence. According to the data collected by MAV (Women in the Visual Arts), ARCO 2017 closed with a bleak rate of female participation: only 5 out of 100 artists were Spanish women. This scarce representation in the art world added to the lack of critical capacity to analyze the causes and finding solutions, generates an inertia that perpetuates the oblivion of women artists.

“We are here” is an action carried out collectively by independent artists and women from different art collectives such as MAV, La Caja de Pandora, Blanco, Negro y Magenta, Empoderarte, Clásicas y Modernas. The artists walked around the fair aisles wearing a headband with a large red geolocation sign on their heads, like those used by the Google Maps application. These symbols stood out above the crowd with the aim of creating a wake-up call.

SOME FIGURES:
6 out of 10 Fine Arts students are women but 7 out of 10 art awards are given to men.
80% of directors in Spanish museums are men.
According to the Luxembourg University, female art sells 47% cheaper than male.
The rate of women’s solo shows at MoMA, Whitney, Guggenheim, MOCA and LACMA is under 20%.
The feminist activism collective Guerrilla Guirls exposed that “less than 5% of the artists in the modern art sections of the Met Museuum of New York are women, but 85% of the nudes are female”.
According to UNESCO, only 34% of the Culture ministers and 31% of the Programming. 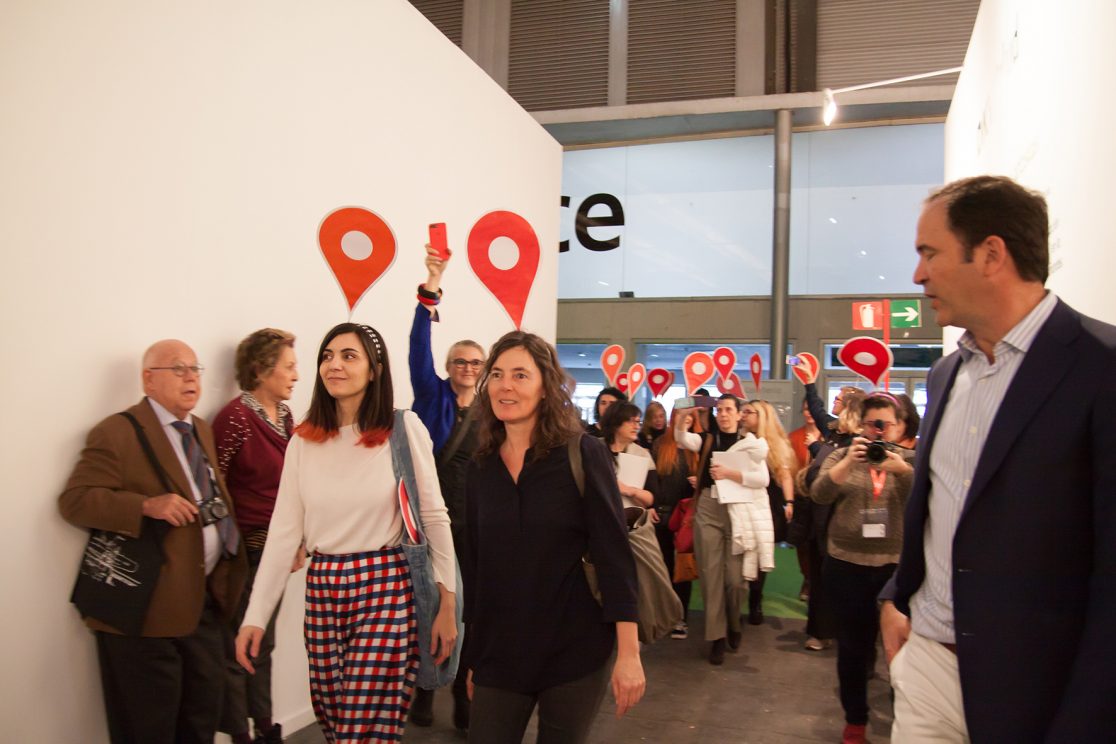 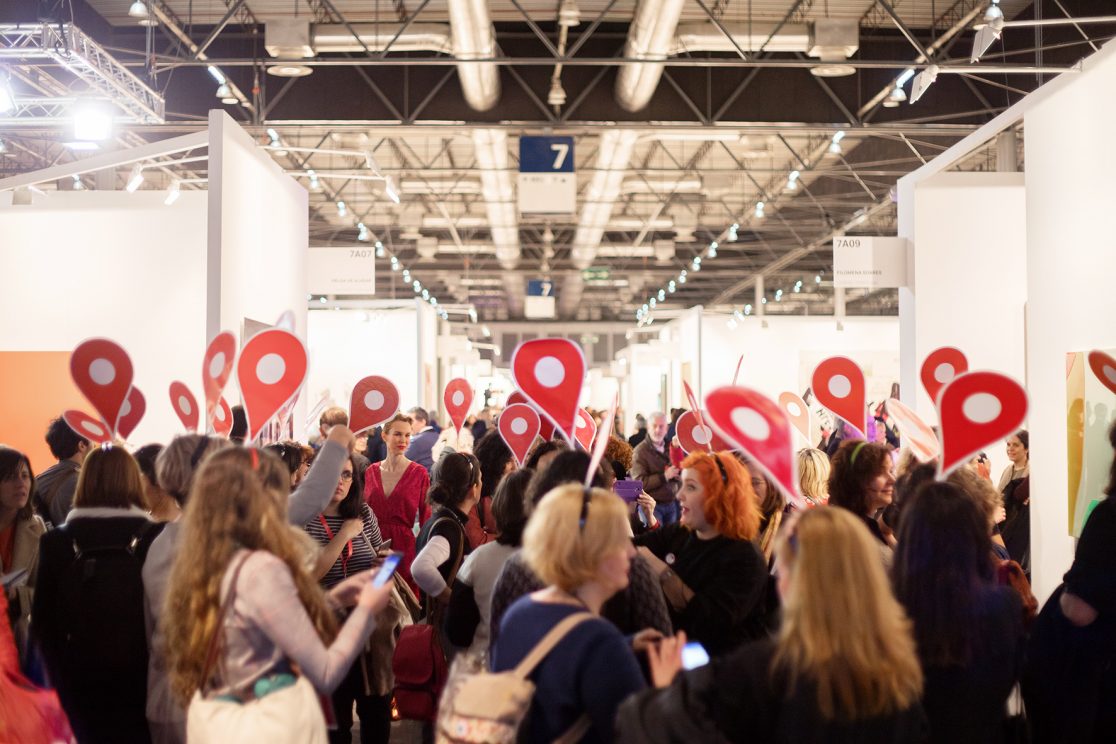 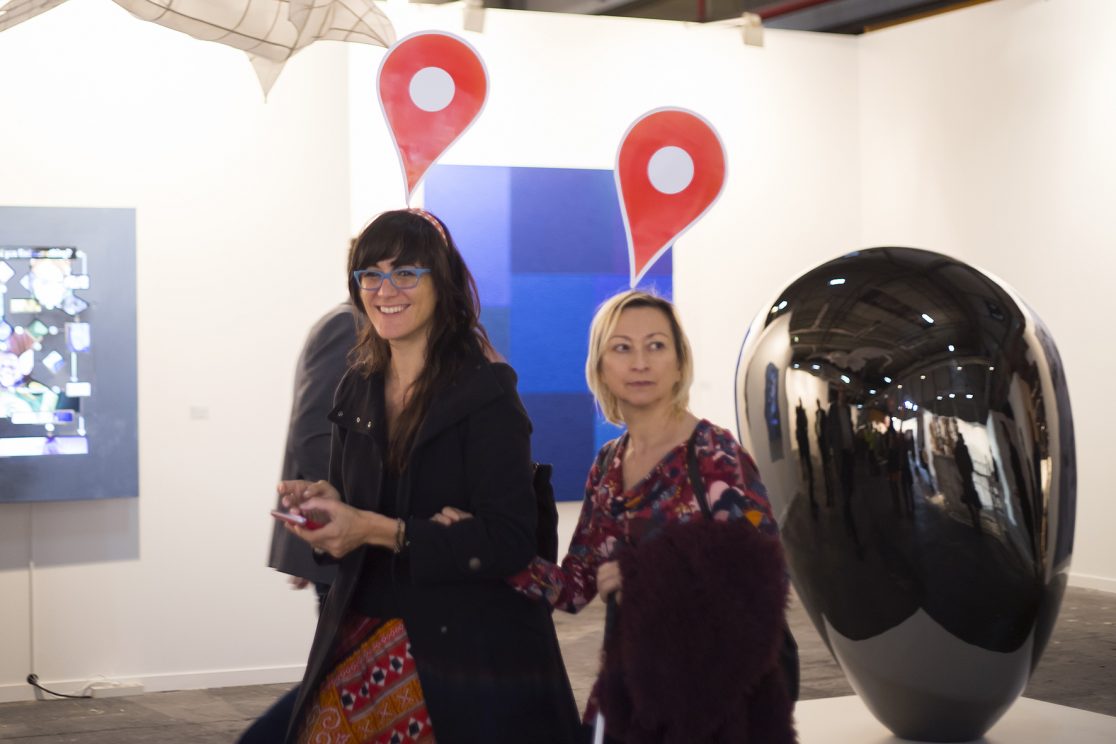 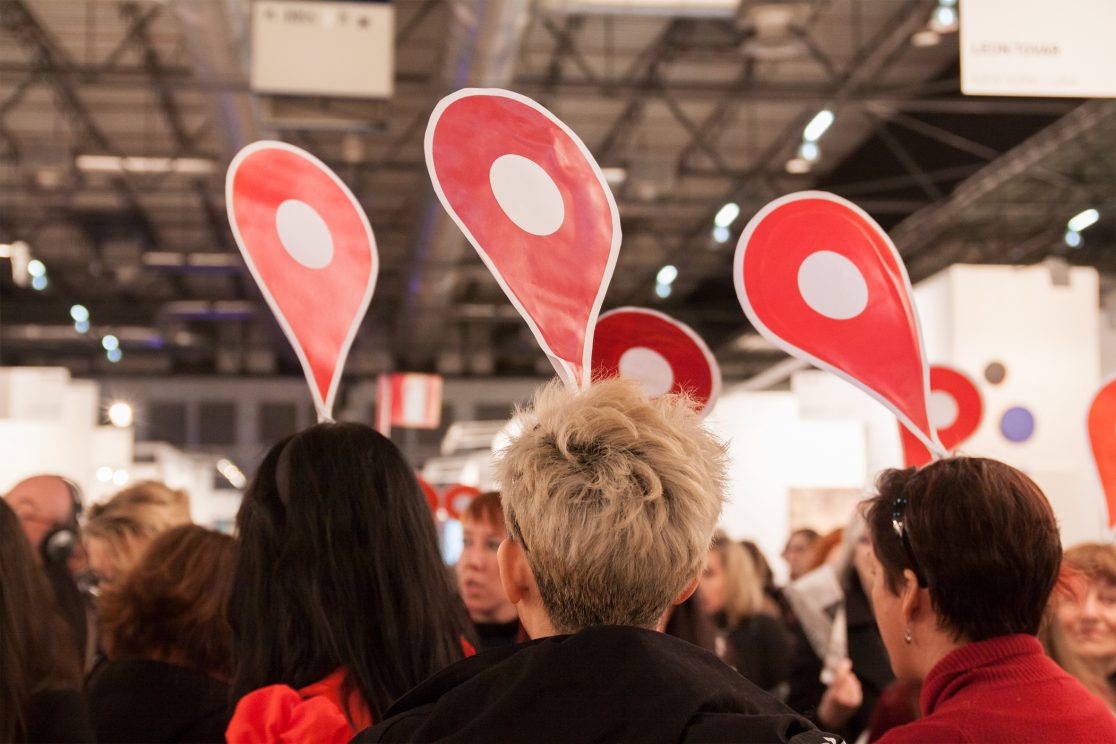 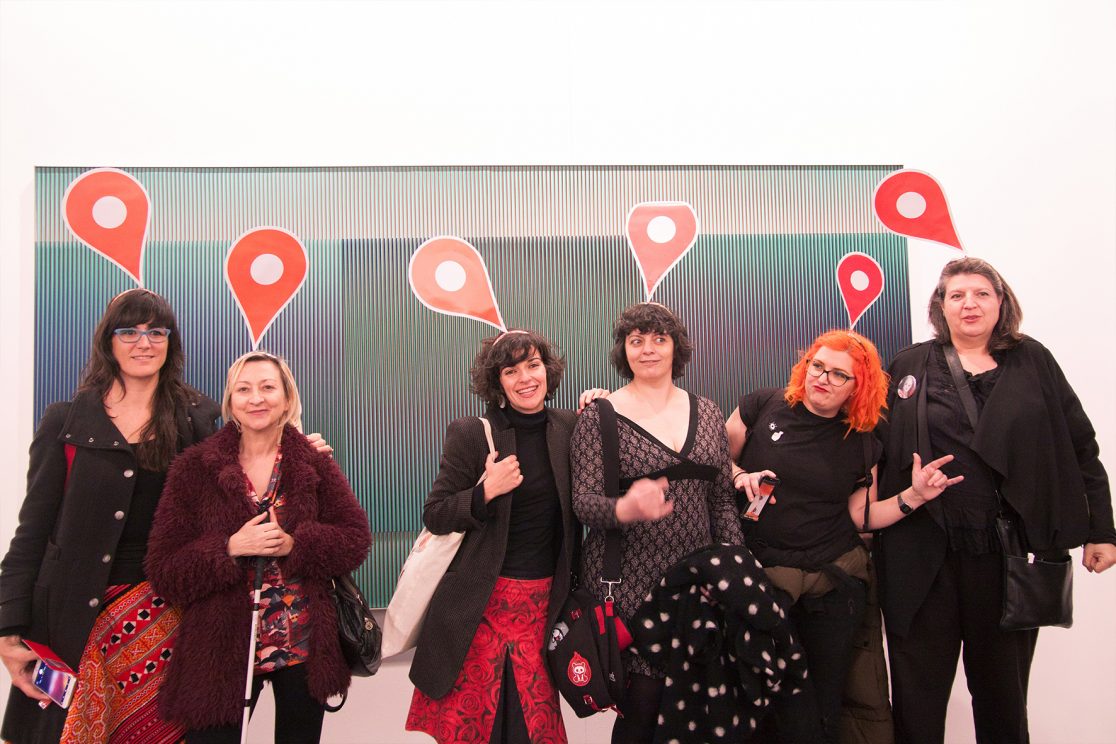 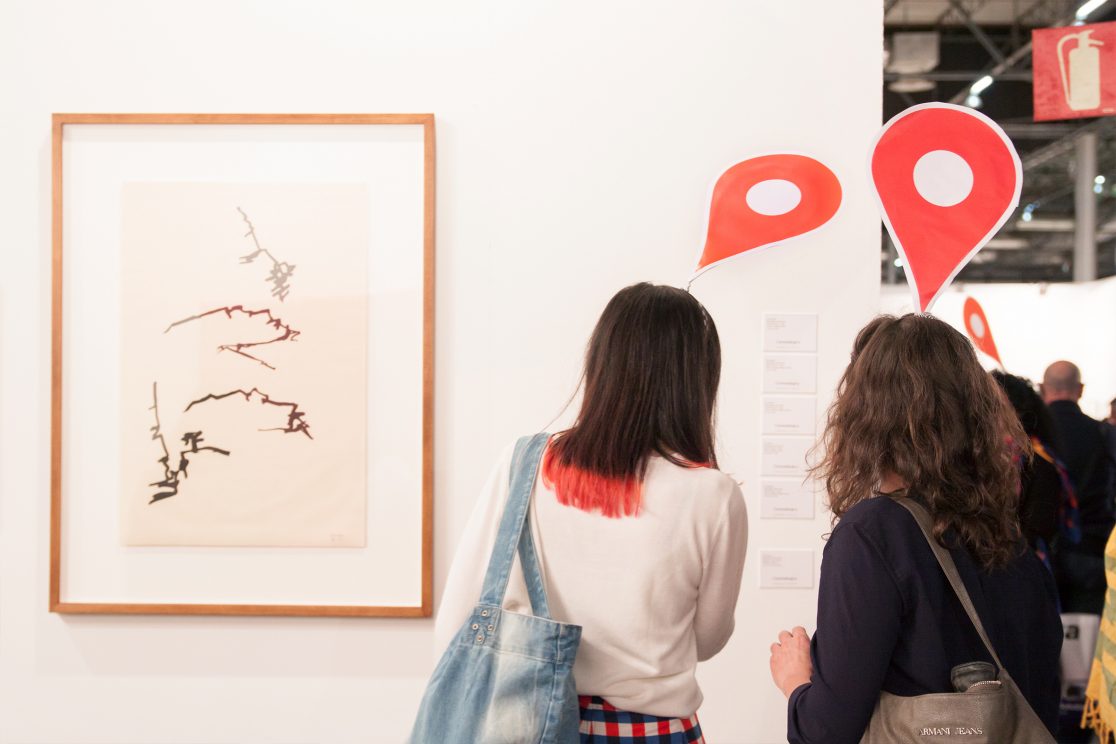 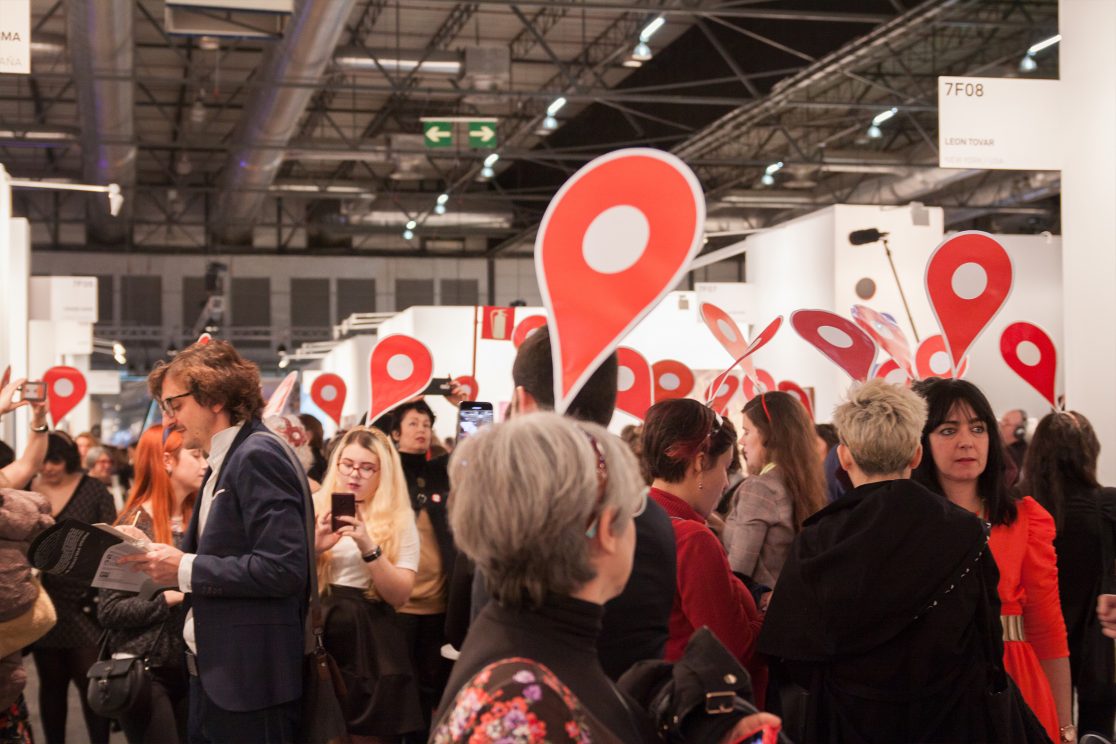 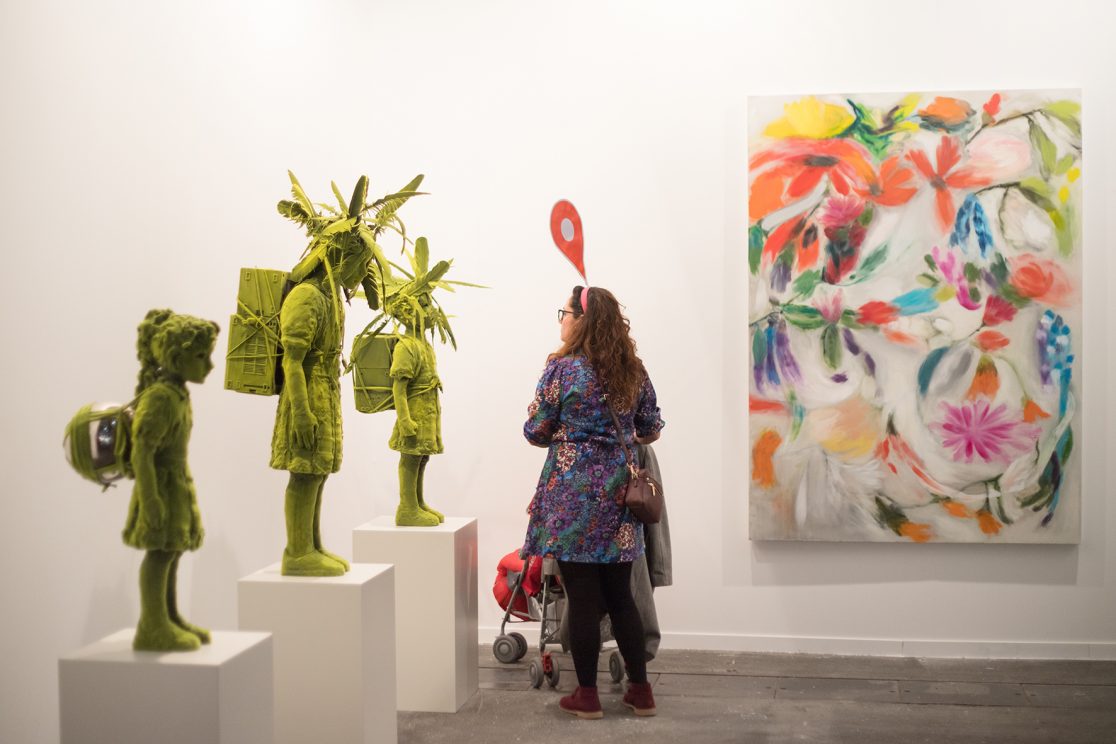 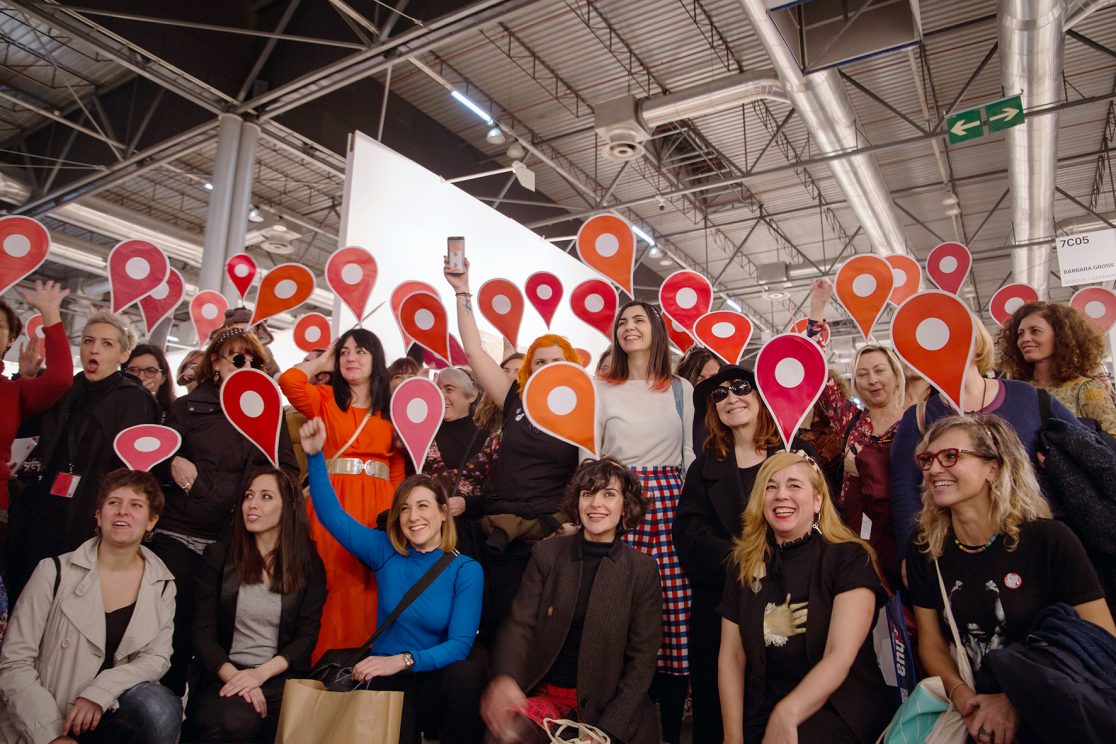 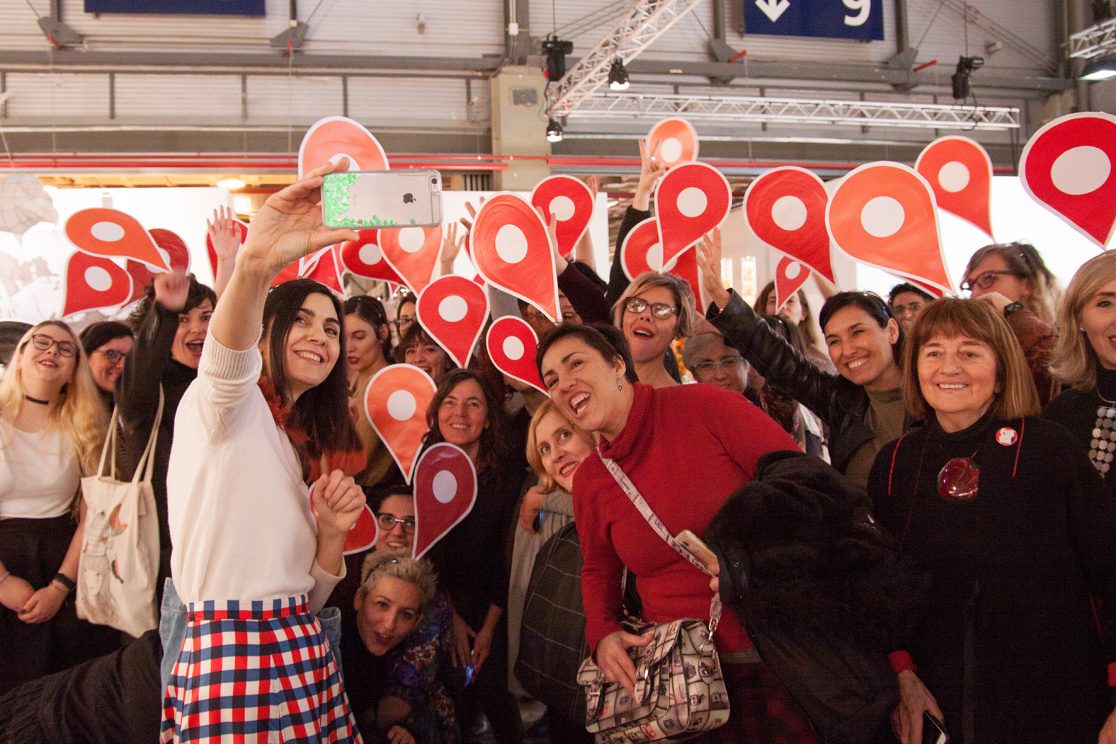 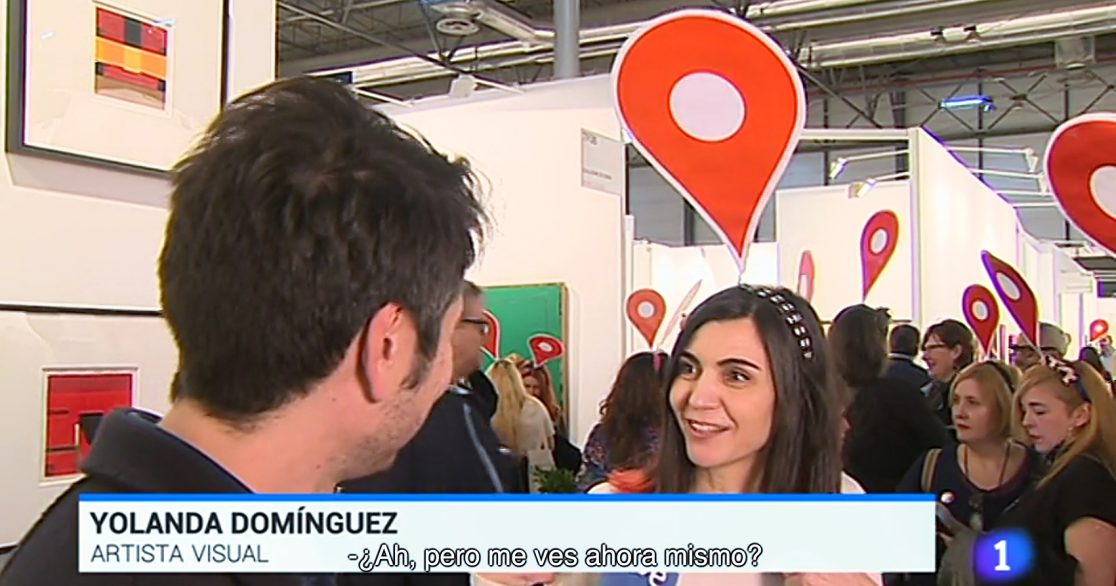 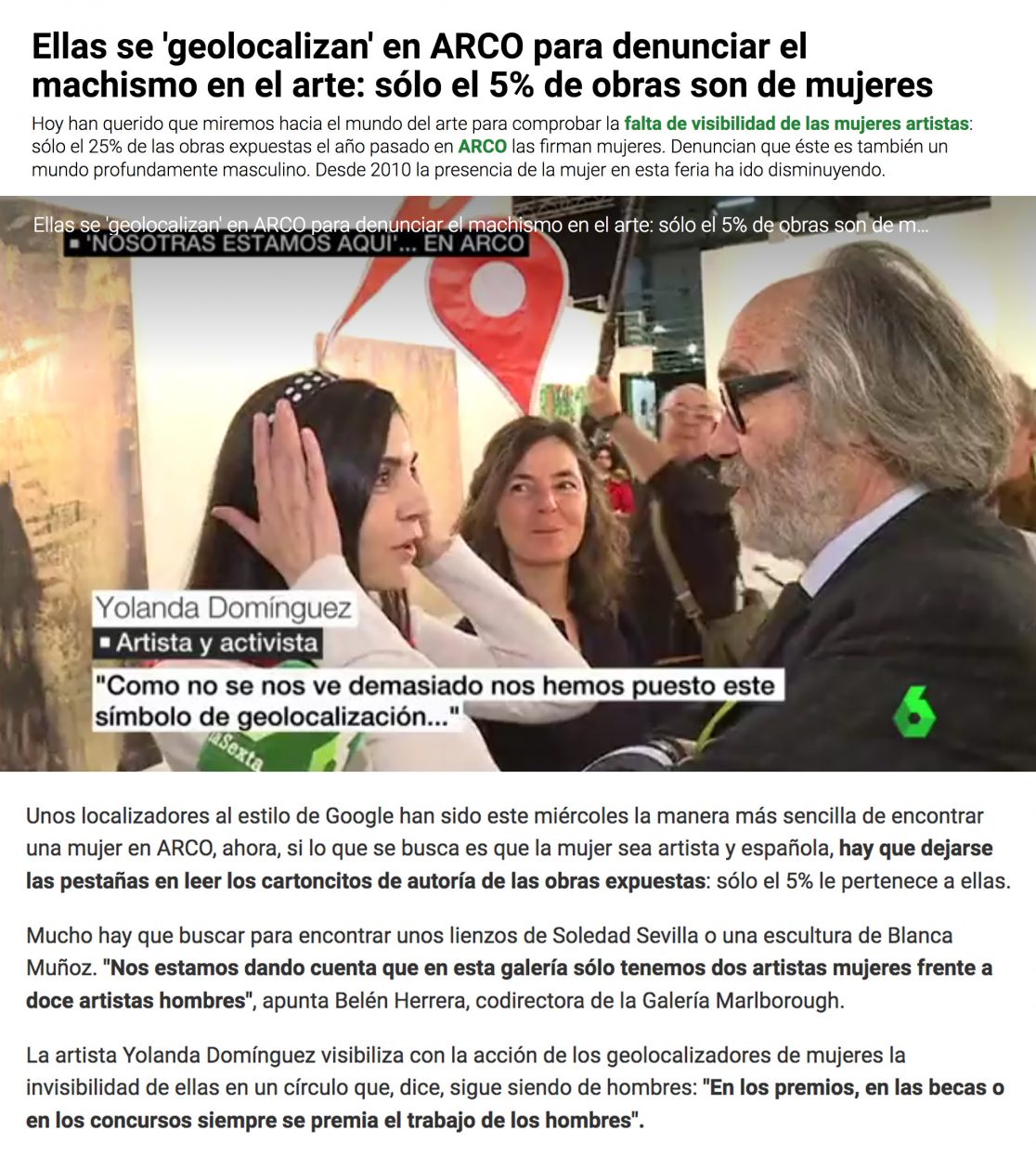 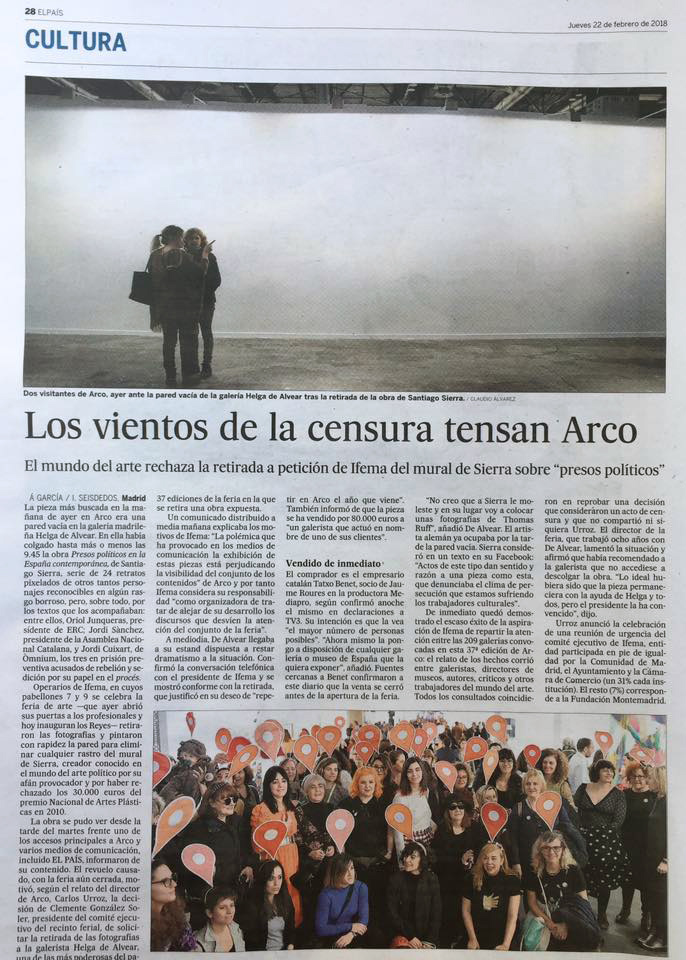 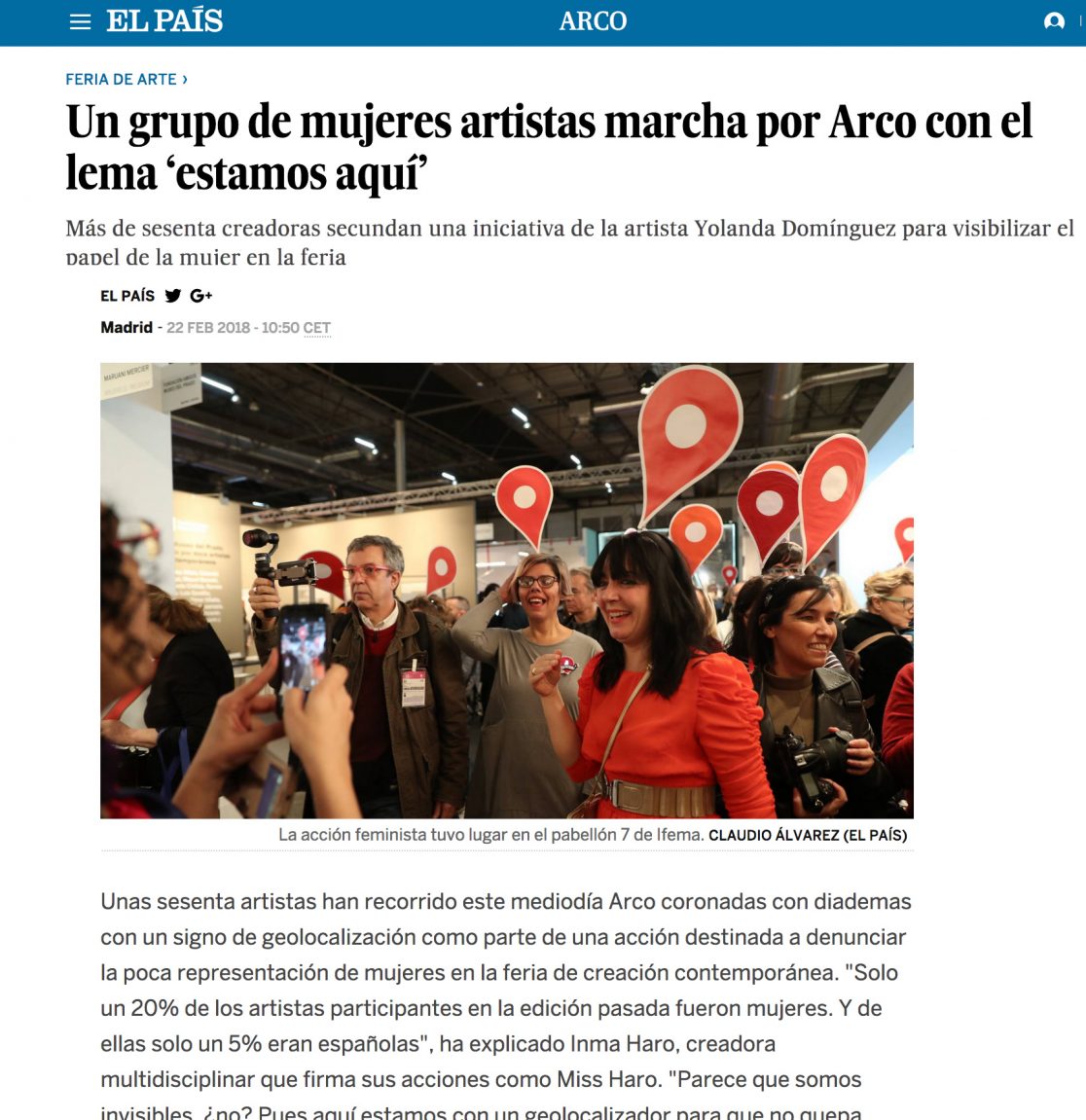 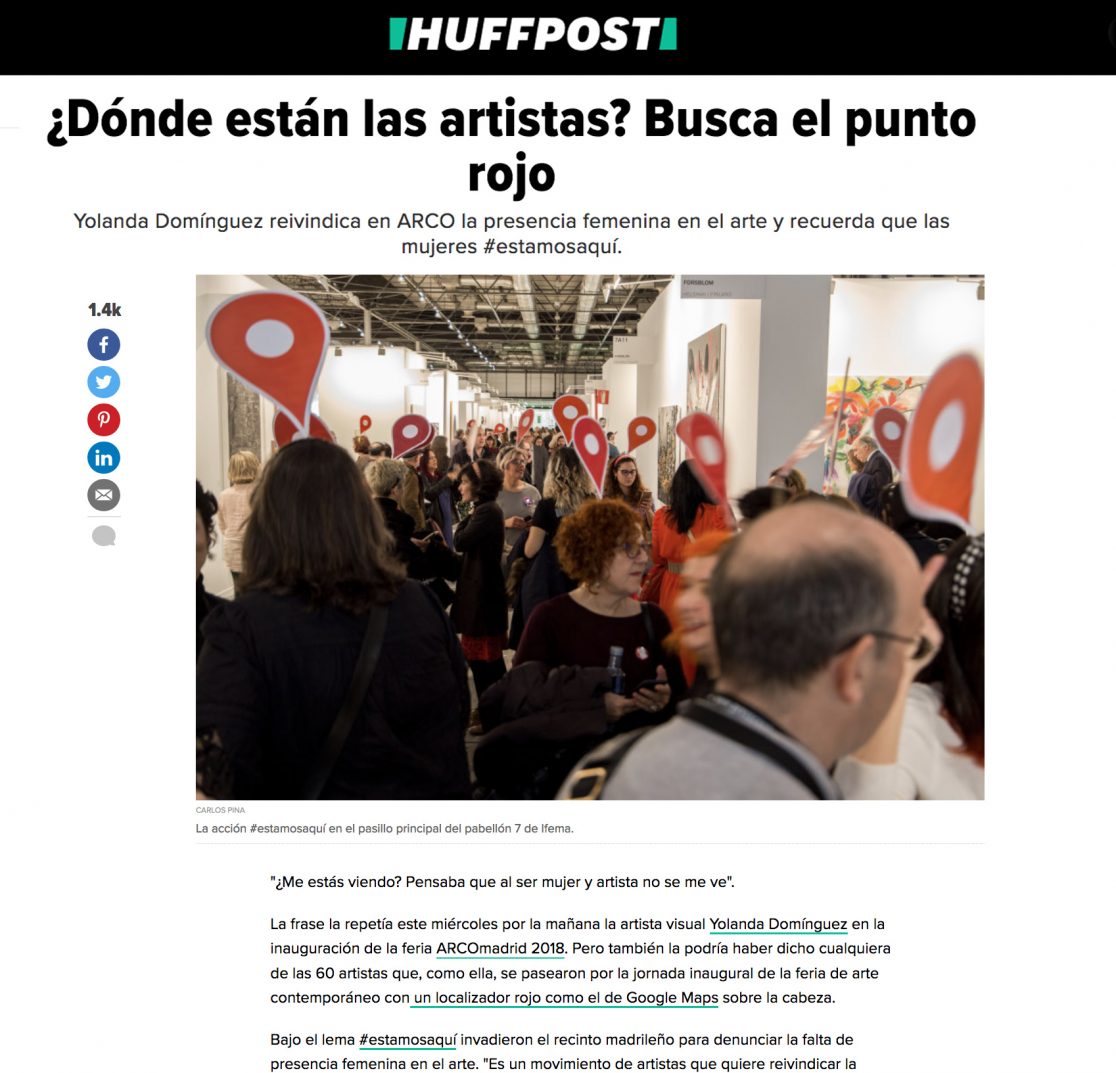 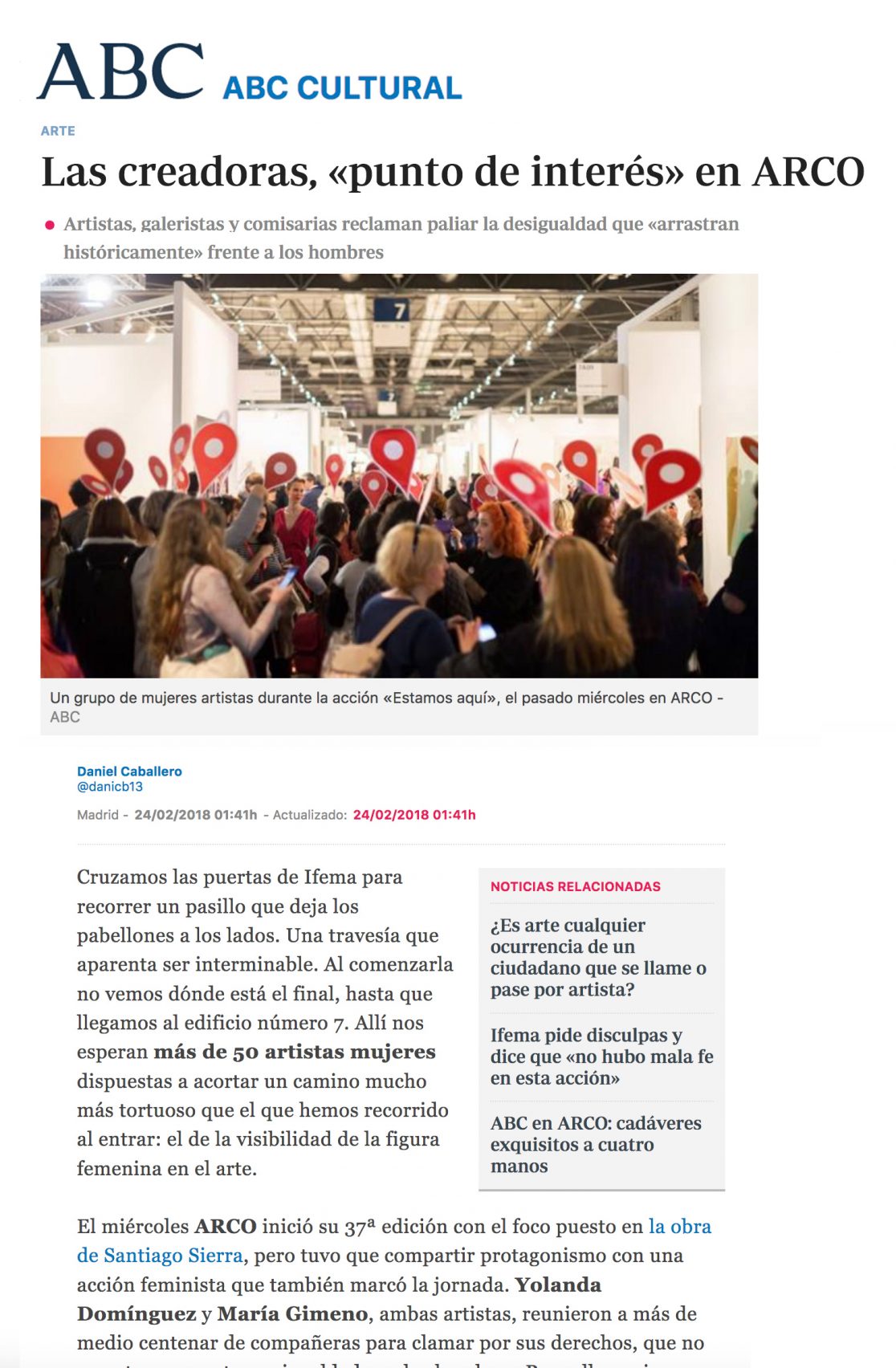